Stretch with Dean Stalham at Beyond Bars

Stretch with Dean Stalham at Beyond Bars 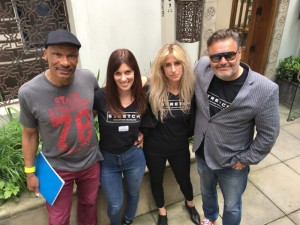 Yesterday, Stretch participated in Beyond Bars, an arts festival showcasing work by former prisoners in central London. Through music, poetry, art and theatre, the event explored the use and effectiveness of prison as a means of punishment and presented a platform for those with lived experience of the system to share their own personal experiences and perspectives.

Stretch presented a play by our resident theatre-maker and writer Dean Stalham, which explored the perspectives of two women in the court room, played beautifully by Angela Peters and Claire Maria Fox.  We were really pleased with how well the piece was received – there were even some tears shed – a great testament to how the piece clearly depicted the emotional struggles of people in this situation.

In keeping with Stretch’s ethos of giving a voice to people so often unheard or misrepresented, the event really put people with lived experience at the forefront. People performing/ speaking and helping to deliver the event had been through the prison system themselves. There was a fantastic range of performances and talks and – equally important – people actually taking time to listen to each other and develop understanding and empathy.

In addition to this performance, Dean Stalham has also received Arts Council funding for a tour of his play Barred, which has already been performed at Salford Arts Centre and the Brady Centre in London as well as in various prisons including Strangeways. The play explores themes such as redemption, education and family ties and has had really positive feedback as both a standalone piece and something which can get prisoners to engage in education themselves and reflect on their own situations. It’s fantastic to see a former prisoner artist receiving support from The Arts Council. As we’ve already seen, Dean’s own experiences in prison inform his work in ways which can’t be done by people who haven’t been there themselves. This helps to resonate with prisoners and makes it a really effective tool for prison rehabilitation. Stretch is pleased to be co-producing the tour alongside Dean.

Many thanks to organisers of Beyond Bars, which was one in a series of events organised in conjunction with Safe Ground and the Howard League. We hope to participate in more opportunities such as this, which help raise awareness and consider solutions to the current prison crisis.